Eastrea has striven for over 60 years to have its own village hall. The Eastrea Village Hall Foundation was formally made a Registered Charity in 1994 and has since sought for a site on which to construct the hall, now known as The Eastrea Centre.

Older villagers may remember that the site of The Windmill, the former public house on the A605, was once agreed for the site of a village hall. There were hopes that the hall might be developed on the large field at the end of Thornham Way, but this was designated public open space. Fenland District Council then nominated the site (below) for the hall, the land being freed for the project in return for development of an adjacent site for 'executive housing'. With this site our target, the Foundation commissioned Jonathan Ellis Miller, the Cambridgeshire architect, to draw up plans for a futuristic building that would harmonise with the rural environment. Quantity Surveyors Henry Riley of Peterborough were appointed to adivse on our costs, and we have had voluntary input on matters like finance from a dedicated team of enthusiasts.

The building that the project team have designed is illustrated below. This is the Eastrea Centre. It is designed to be highly efficient in terms of energy conservation and sound insulation, and will provide much-needed facilities for Eastrea - and indeed for much of the area administered by Fenland District Council.

MODEL OF THE EASTREA CENTRE

Below is the site chosen for the construction of the Eastrea Centre. The land lies to the east of Eastrea, south of Coates Road (the A 605). The site is roughly square, and covers roughly an acre. An adjoining site has been agreed for the construction of executive houses, as a condition of land being provided for the Centre. The permissions are now before Fenland District Council, and are awiting a decision -- probably in November. 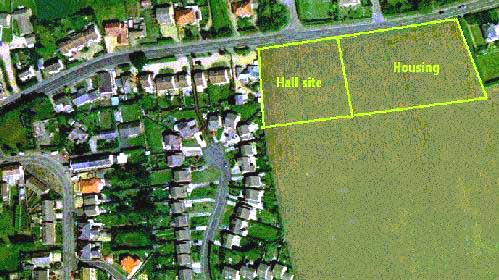 SITE AGREED IN 2004 FOR THE EASTREA CENTRE

JD Developments took over the handling of the site. Negotiations in 2008 confirmed that they could offer £250,000 (subject to being given permission to build 14 homes on the adjacent land) and at the Annual General Meeting a committee of eight elected Trustees set about finalising the plans. Meanwhile our submission for a grant of £500,000 to the Big Lottery Fund was successful in getting through to the final shortlist, and an application has also been prepared for WREN (the landfill tax people).

Other sites had meanwhile been considered. A second site was on open land accessed through the farm gateway opposite the southern opening off Mayfield Road onto Wype Road. It is owned by Cancer Research UK. Discussions between their lawyers and the local authority reached an impasse over the lack of a suitable pavement through the village along Wype Road. The third site is south of the village, on the western side of Wype Road. This open meadow owned by Mr Brian Aldridge was duly considered, but unfortunately it proved to be too far outside the village to ne covered by the Development Area boundary (the DAB).

FACILITIES
Proposals from villagers have emphasised that the village hall should provide many facilities, such as:

In June 2008 the first major document for this development strategy was prepared. Entitled The Eastrea Plan, it sets out a series of proposals, including a village sign for the green, a new bus-stop for Eastrea, and an outline of how traditionally-designed homes could provide affordable housing for young Eastrea families. These homes would be set alongside the Eastrea Centre providing a community centre that would help Fenland realise their latest Core Strategy for the future.

A second document was the Business Plan and Report for the Eastrea Centre itself. This document contains more than 11,000 words and 100 pictures, and fully details the site, the project costs, the new committee and our plan of action. The first copy was sent (as you'd expect) to the Mayor of Whittlesey, and others have since been discussed with local our MP and his successor. The Eastrea Centre is back in action, and future developments will be posted here!

CONTACT
E-mail may be sent to: mail@eastrea.net - eventually the village would be able to operate its domain from a computer system in the village hall.