Publisher's notes from the original jacket:

Perhaps flying saucers ARE space craft after ail? ARE there sophisticated beings watching our move- ments ? As ants are unaware of us, ARE there super-beings of whom we know nothing ! And - like stone-age tribes who knew nothing more than a drum-beat - have we yet to realise that there is a vast international network of outer space communication?

These are the thoughts and questions that THE EARTH WATCHERS will provoke. Yet, unlike many books written by flying saucer enthusiasts, this study is a serious, scientific analysis written by a sceptic. Brian J. Ford - best known for his papers in specialist publications and for his contributions to national journals - is a distinguished research scientist. His scientific discoveries are world-famous, his work is in Russian, Japanese, Chinese and most Western languages. The study of unidentified flying objects' has been an interest of his for ten years. He has taken part in several television programmes in which he has discussed the subject with flying saucer enthusiasts: he is not easily convinced.

But - as this book shows - the statistics can't be denied. Even pessimistic estimates allow that there must be large numbers of inhabited worlds in space. And if the figure calculated is said to be a million times too large, there are still one hundred thousand other worlds with life on them.

This fascinating book draws together threads from many fields. How do we see objects? Are there psycho- logical reasons making us want to believe in flying saucers? What is the truth about scientific observa- tories even now trying to make contact? Can we make observations in space that are literally willed to happen? Author Ford demonstrates some controversial answers.

He points to some devastating conclusions, too. Illustrated with some startling photographs (from a flying man to a breathtaking comparison between features seen on Mars and earth-bound rocket sites), THE EARTH WATCHERS will unquestionably make you think. 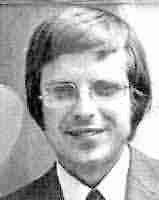 BRIAN J. FORD is a descendent of James Watt. Born in Wiltshire in 1939, educated in London, Peterborough and the University of Wales, he now lives in Cardiff within a few minutes of the beach and mountains. He is the author of over a thousand articles, books and papers. He began his first series of weekly 'Comment' articles on science at the age of 19, before he went to college; since has been guest contributor to publications including The Times, Guardian, London Sunday Times, Private Eye, Oz and innumerable specialist journals.

He is an authority on Microscopy and has written several books on the subject. He is the producer of two half-hour BBC programmes on science and has also directed short TV films. He has taken part in programmes on UFO's on both BBC TV and ITV.

Move to the 'flying saucer' pictures.